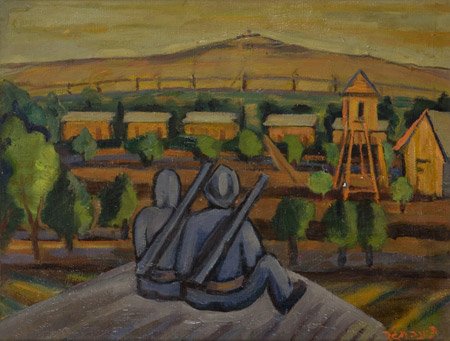 Portrait of Soutine by Modigliani

1. Chaim Soutine was born near Minsk in January 1893, the tenth of eleven children.

2. He studied art in Vilnius between 1910 and 1913, then went to Paris to study at the Ecole des Beaux-Arts. In Paris, he became friends with Modigliani, who painted his portrait several times.

3. He was the typically penniless expressionist artist when, in 1923, he was “discovered” by American art collector Albert C. Barnes, who bought sixty of his paintings.

4. A still life by Rembrandt influenced a series of paintings he did of a carcass of beef. These are now considered his masterpieces, but at the time caused something of a local uproar. It’s said that Marc Chagall was undone, believing Soutine murdered, when he found blood oozing out under the studio door. Then there were the neighbors – how would you feel if the artist next door kept a ripening carcass in his studio?

5. After the Nazi occupation of France, Soutine went on the run. He died of a perforated ulcer in August 1943.

6. Amadeo Clemente Modigliani, painter and sculptor, was born in Livorno, Italy, in July 1884. His father was a mining engineer from a family of successful businessmen; his mother was descended from a family of intellectuals learned in Judaica. Family lore said that Chaim unwittingly saved the family’s possessions when a downturn in the price of metals sent his father into bankruptcy. His mother was pregnant with Chaim at the time and went into labor when the bailiffs arrived. All the family’s valuables were piled on top of her, where they were safe from seizure.

7. The boy painted from an early age and studied art in Livorno. His adolescent years were sickly. He suffered from pleurisy and typhus and eventually contracted tuberculosis. In 1902, he went to Paris, where his addictions to alcohol and drugs became legendary. It’s now proposed that he might have taken drugs to mask his pain and his bouts of coughing, knowing that people would tolerate a drunk, but would shun someone with TB.

8. His work is characterized by asymmetry and elongation of form, with simple, strong lines and mask-like faces. He produced sculpture for a period between 1909 and 1914, influenced by Brancusi and by his study of African sculpture. A series of nudes shocked Paris when they were shown in 1917. Today, he is perhaps best known for his portraits.

9. He was known back then for his outrageous behavior, sometimes stripping himself naked at parties. He had frequent affairs with women, notably the poet Anna Akhmatova, the poet Beatrice Hastings, and the flamboyant, high-strung painter Jeanne Hebuterne, who often made jealous scenes in public.

10. Modigliani died in January 1920. The following day, Hebuterne threw herself to her death from a fifth-story window, nine-months pregnant with their second child.

In Tel Aviv, you’ll find Soutine and Modigliani Streets, among a number of other streets named for artists, just north-east of Rabin Square.