1. Nahum Gutman was born in Bessarabia in 1898. In 1905, his family moved to Palestine, where he attended Herzliya Gymnasium and later served, during World War I, in the Jewish Legion. He studied art at the Bezalel School before going to Europe in 1920 to study in Vienna, Berlin and Paris. He returned home in 1926.

2. Together with Reuven Rubin and Ziona Tagger [see my blogpost of 11/5/14] he pioneered a distinctively Israeli artistic style that portrayed the landscape, the light and the people of Eretz Yisrael.

3. Gutman’s vibrant use of color is a keynote of his work. He often portrayed the Arab community, depicting both the sensuousness and the grittiness of life in the Middle East. He painted in a variety of media, including oil, gouache, watercolor and pen and ink; and he produced many large sculptures and mosaics. Critics have found notes of Renoir, Picasso, Rousseau and Dufy in his work.

4. He is notable, as well, for writing and illustrating children’s books. In 1931, he co-founded a children’s journal, Davar LaYeladim, and remained on its staff for 32 years. Among the many awards he received for his work in children’s literature was the Israel Prize, conferred in 1978. 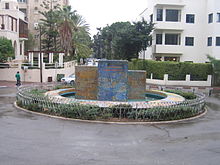 5. He died in 1980. His work can be seen all over Tel Aviv –  in a mosaic mural at the Shalom Tower; in a mosaic wall at Herzliya High School; in a mosaic fountain on Bialik Street; and at the Nahum Gutman Museum at 21 Rokach St., Neve Tzedek. 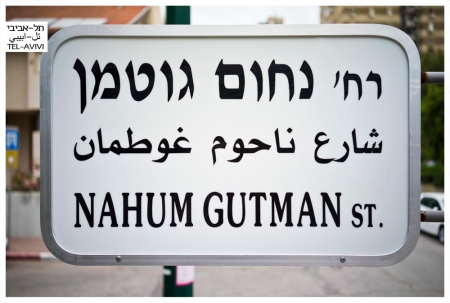 Many thanks to Ido Biran,Telavivi, for this photo of Nahum Gutman Street, located northwest of Tel Aviv University. 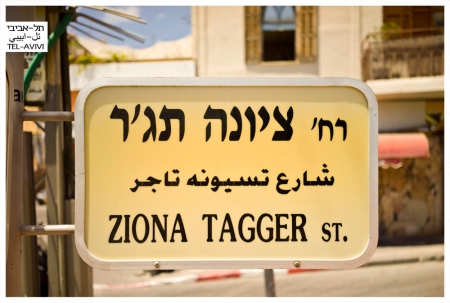 1. He was born Mordukh Matysovich Antokolski in Vilna in 1840, the last of seven children, to a Jewish family of modest means. As a boy, he drew everywhere, on any surface – table, walls – and did small woodcuts. Though his father thought this an odd occupation, eventually he apprenticed the boy to a wood-cutter.

2. With some help from people of wealth and influence, he was able to study in St. Petersburg as an external student at the Imperial Academy of Arts, 1862-8. His earliest work exhibited Jewish themes, including “Nathan the Wise” and “The Talmudic Debate.”

3. Predictably, his subjects  raised controversy, but nonetheless he met with early success. “A Jewish Tailor” (1864, in wood) won a small silver medal from the Academy. “Stingy Man” (AKA “Jewish Miser” AKA “Miser Counting his Money,” 1865, in ivory) was awarded the Grand Silver Medal.

4. He spent the years 1868-70 in Berlin, in near-poverty, working under difficult conditions. Then his statue of Ivan the Terrible, completed in 1870, was purchased for the Hermitage by Tsar Alexander II. Crowds of people went to view it, and he was awarded the title of Academician by the Academy. “I fell asleep poor, and awoke rich,” he said. “Yesterday I was unknown, but today I’m all the rage.”

6. He was known for the psychological qualities in his work. His later subjects focused on martyrdom and suffering mankind. He did sculptures of Jesus, Spinoza, Socrates. Noted architect and art critic Vasily Stasov described his work as having “the features of the simple truth, the things that, previously, nobody dared think about in sculpture.”

The sculptor in his studio

7. In Italy, in 1872, he completed a statue of Peter the Great for the Peterhof Palace. Initially, it was poorly received….

8. Then came the Universelle Exposition in Paris, 1878. Antokolsky received the grand prize for an exhibition of his works, including “Peter the Great,” and he was awarded the French Legion of Honor.

9. He died in 1902 and is buried in St. Petersburg in the Jewish section of the Preobazhenskoye Cemetery.

10. A large portion of his work is in the Tretyakov Gallery in Moscow, but several smaller sculptures may be found in the Israel Museum in Jerusalem.

3. In 1902, he was one of the founders of Judische Verlag, the first Jewish-Zionist publisher in Western Europe. Based in Berlin, the company produced artistic and literary works – done by Jews, of course.

4. He was a delegate to the Sixth Zionist Congress in 1903, when the Uganda Plan was first broached.

5. In the years between 1906 and the First World War, he traveled frequently to Palestine. He was with Boris Schatz in Jerusalem for the establishment of the Bezalel Art School and taught the first class there.

6. His influence on the establishment of a distinctly Israeli style of art was enormous. He explored Jewish themes, using Biblical subjects in a Zionist context, and incorporating Jewish symbols into art nouveau style. It was thus that he created a visual vocabulary for Zionism.

7. Reportedly, it is his photograph of Herzl that became THE portrait we know today. He believed that Herzl was the perfect example of the New Jew in the modern world and used Herzl as a model for depictions of Moses.

2. He attended the Berlin Academy of Fine Arts, completing his studies in 1899. However, despite his artistic excellence, he was not permitted to teach there, because he was Jewish. Was it as a protest against such treatment that he signed his works with his Hebrew name and a Magen David?

3. In 1904, he joined the Berlin Secession – the modern art movement that had been formed in 1898 as an alternative to the state-run Association of Berlin Artists. He became an artist of world renown, known for his landscapes and portraits, completing commissions for such figures as Ibsen, Nietzsche, Freud, Einstein, Herzl and Oscar Wilde.

4. An accomplished printmaker, in 1908 he published The Art of Etching, a seminal work. Among his students were Marc Chagall, Jacob Steinhardt and Max Liebermann.

5. He was an ardent Zionist. He displayed his artworks at the Fifth Zionist Congress in 1901, and he was a founder of the Mizrachi religious Zionist movement (1902). He visited Palestine for the first time in 1903.

6. During World War I, he served in the German Army as a translator, liaison officer and military artist. He received an Iron Cross class I for bravery and was made an officer. The year 1917 found him on the eastern front serving the German Eastern Front High Command with regard to Jewish affairs. He made aliyah in 1922, settling in Haifa, where he fostered the cultural and artistic life of the city.

7. He taught at the Bezalel Academy and helped establish the Tel Aviv Museum of Art.

9. In 2013, the Hermann Struck Museum (formerly the Struck House) opened in Haifa in the house where Struck lived at 23 Arlosorov Street.

Portrait of Soutine by Modigliani

1. Chaim Soutine was born near Minsk in January 1893, the tenth of eleven children.

2. He studied art in Vilnius between 1910 and 1913, then went to Paris to study at the Ecole des Beaux-Arts. In Paris, he became friends with Modigliani, who painted his portrait several times.

3. He was the typically penniless expressionist artist when, in 1923, he was “discovered” by American art collector Albert C. Barnes, who bought sixty of his paintings.

4. A still life by Rembrandt influenced a series of paintings he did of a carcass of beef. These are now considered his masterpieces, but at the time caused something of a local uproar. It’s said that Marc Chagall was undone, believing Soutine murdered, when he found blood oozing out under the studio door. Then there were the neighbors – how would you feel if the artist next door kept a ripening carcass in his studio?

5. After the Nazi occupation of France, Soutine went on the run. He died of a perforated ulcer in August 1943.

6. Amadeo Clemente Modigliani, painter and sculptor, was born in Livorno, Italy, in July 1884. His father was a mining engineer from a family of successful businessmen; his mother was descended from a family of intellectuals learned in Judaica. Family lore said that Chaim unwittingly saved the family’s possessions when a downturn in the price of metals sent his father into bankruptcy. His mother was pregnant with Chaim at the time and went into labor when the bailiffs arrived. All the family’s valuables were piled on top of her, where they were safe from seizure.

7. The boy painted from an early age and studied art in Livorno. His adolescent years were sickly. He suffered from pleurisy and typhus and eventually contracted tuberculosis. In 1902, he went to Paris, where his addictions to alcohol and drugs became legendary. It’s now proposed that he might have taken drugs to mask his pain and his bouts of coughing, knowing that people would tolerate a drunk, but would shun someone with TB.

8. His work is characterized by asymmetry and elongation of form, with simple, strong lines and mask-like faces. He produced sculpture for a period between 1909 and 1914, influenced by Brancusi and by his study of African sculpture. A series of nudes shocked Paris when they were shown in 1917. Today, he is perhaps best known for his portraits.

9. He was known back then for his outrageous behavior, sometimes stripping himself naked at parties. He had frequent affairs with women, notably the poet Anna Akhmatova, the poet Beatrice Hastings, and the flamboyant, high-strung painter Jeanne Hebuterne, who often made jealous scenes in public.

10. Modigliani died in January 1920. The following day, Hebuterne threw herself to her death from a fifth-story window, nine-months pregnant with their second child.

In Tel Aviv, you’ll find Soutine and Modigliani Streets, among a number of other streets named for artists, just north-east of Rabin Square.