Lion of the Desert

1. AKA Judah Maccabee, he was the third of five sons of Matathias of Modi’in, who initiated a revolt against the Seleucid king Antiochus IV Epiphanes, when that ruler sought to impose a Hellenistic way of life and worship on the Jews.

2. After his father’s death in 165 BCE, Yehudah, a Judean priest, assumed command of the resistance forces against the Greco-Syrian empire.

3. He led his troops to victory in stunning and tactically brilliant defeats over the Greek armies at Bet-Horon, Emmaus, and, ultimately, Mt. Zion.

4. He captured the Temple in Jerusalem and, in December of 164 BCE, purged it of all Hellenistic-cult paraphernalia, re-constructing it according to the specs in the Torah and reconsecrating it.

5. He made a treaty with the Roman Republic in 161 BCE – the first recorded treaty between the Jews and the Romans. After many additional victories in Gilead, Transjordan and Galilee, he was defeated in the field while fighting the Syrian forces.

6. He died in battle north of Jerusalem in 160 BCE and was buried in the family sepulcher in Modi’in. He was succeeded by his brother Jonathan; the descendants of his brother Simeon became the Hasmonean dynasty in Judea, where, as a result of their rebellion, the Jews were able to enjoy independence and the liberty to worship God according to their own lights. For a fuller and more elegant explanation of what happened, try Simon Schama’s The Story of the Jews.

7. So, if he was Yehudah ben Mattityahu, how did he become Yehudah HaMaccabi?

9. Maccabee is a sobriquet, meaning “hammer” in Aramaic. That’s one explanation. Another is that it’s an acronym for the verse Mi Kamocha Ba’elim Adonai, “Who is like unto you, oh God.” Or it might be an acronym for his father’s name, Mattityahu Kohen ben Yochanan. Or a shortened form of the Hebrew for “the one designated by Adonai.” Take your pick.

10. Many works of art have been created, written, sung and played about him. Among the most notable are the following: Handel’s oratorio “Judas Maccabaeus “; Beethoven’s theme and variations for cello and piano on a theme from the Handel oratorio; Longfellow’s five-act verse tragedy and many other poems and plays by writers in Hebrew and Yiddish; Howard Fast’s My Glorious Brothers published in 1948 during Israel’s war of independence, and still a good read today.

Thanks to Ido Biran telavivi for this photo. 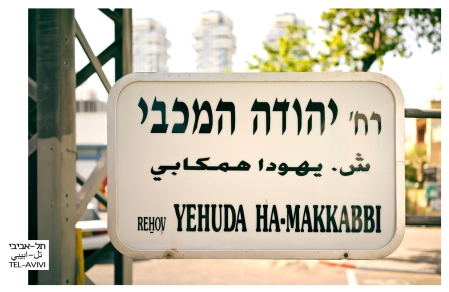 Happy Hanukkah to all!