1. Isaac Leib Peretz, AKA Yitzhak Leibush Peretz and I.L. Peretz, was born in Zamosc, Poland, in 1851 and raised in orthodox Jewish surroundings. But it was a time of change, and when he was fifteen years of age, he opted to support the Haskalah, the Jewish enlightenment.

2. He learned Polish, Russian, German and French; passed an exam to become a lawyer; then took up a trade as a whiskey distiller, at which he failed. About the same time, he began to write poetry, songs and tales in Hebrew, practicing law to make a living – until the Russian government revoked his license.

3. In 1888 his first Yiddish work appeared, a ballad that was anthologized by Sholom Aleichem, about a young man who tries – unsuccessfully – to ward off the temptations of Lilith.

4. He turned out stories, folk tales and plays. In his works he rejected cultural universalism, contending that each of the world’s nations has its own unique character.

5. As opposed to Sholom Aleichem and Mendele Mokher Seforim, our two other great classical Yiddish writers, Peretz especially appealed to intellectuals in the cities. His social criticism favored the labor movement. His essays condemned anti-Semitic acts. He argued for enlightenment ideas, calling for self-determination and resistance against humiliation.

6. Still, though his outlook was secular, he respected sincere faith; the short stories highlight the superiority of honest piety over empty religiosity. Doubt mingles with faith, symbolism with realism, and tradition with modernism in tales that explore themes of forgiveness, of self-sacrifice, modesty and purity.

7. His most-known works are “Oyb Nisht Nokh Hekher” (“If Not Higher”) and “Bontshe Shvayg” (“Bontshe the Silent”). They are such beautiful stories that I’d like to transcribe them here. If you don’t know them, look them up. Right now.

8. In the last ten years of his life, as unofficial leader of the Yiddishist movement, he worked hard to foster a national cultural life for Jewry in the Diaspora. He was editor of Di Yidishe Bibliotek (The Jewish Library), which presented a broad cross-section of articles on secular subjects, especially science. He was known for his generosity in assisting other Yiddish writers. In 1908 he served as deputy chairman at a conference on Yiddish in Czernowitz, Austria-Hungary.

9. He died in Warsaw in 1915 and was buried in the Okopowa Street Jewish cemetery. A crowd of 100,000 attended the interment. 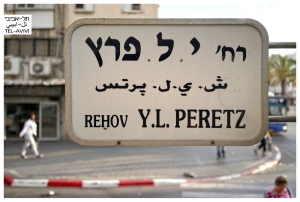 10. In addition to Tel Aviv and Haifa, streets are named for him in Hod Hasharon, Bat Yam, Kiryat Yam, Holon, Givat Shmuel and Warsaw. Peretz Square in lower Manhattan is named for him, too. His work lives on: the 1907 play A Night in the Old Marketplace was adapted in 2007 by Frank London, the great klezmerist, and Glen Berger, for a multi-media theatrical presentation. A CD is available.

Special thanks to Tel Avivi (Ido Biran) for the photo of the street and the sign. For more, visit https://www.facebook.com/telavivi1909. 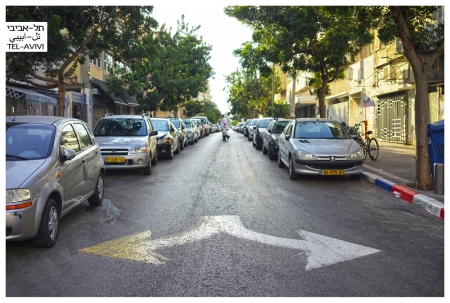 1. Nissim Behar, born in Jerusalem in 1848, is considered the father of modern Hebrew language education. He was the son of Rabbi Eliezer Behar, originally of Rumania, who taught him Talmud. But he learned modern Hebrew from Eliezer ben Yehudah [see my post of 2/16/13].

2. In 1863, the Behar family moved to Constantinople. There, Adolphe Cremieux [see my post of 2/19/14] spotted him as a gifted student and in 1867 arranged for him to go to Paris to study at the Ecole Orientale.

3. Having complete his studies, Behar returned east to organize schools on behalf of the Alliance Israelite Universelle in Aleppo (1869), Bulgaria (1874) and Constantinople, where he headed the school (1873-82). In 1879 he authored a biography of Cremieux in Judaeo-Spanish (Ladino).

4. In 1882, he returned to Jerusalem, where he was involved in founding the Alliance Israelite Universelle. He both directed the school (1882-7) and taught there. He was a proponent of the “direct method” of language education, which involved submersion in the language. If you’ve studied Hebrew in an ulpan, you’re an indirect beneficiary of his work.

5. In 1901, having ended his teaching career, he moved to New York City to represent the Alliance.

6. In 1906, he founded the National Liberal Immigration League, the mission of which was to lobby against anti-immigration laws such as literacy tests. He was voluble, speaking before Congressional hearings and in other ways giving a public face to a cause that other Jewish organizations thought better handled behind the scenes. He was active in the league until 1924.

8. Nissim Behar died and was buried in the US in 1931. The following year in Jerusalem, his remains were re-interred beside those of his father on the Mount of Olives.

1. Menahem Begin was born in Brest-Litovsk in 1913 to a mother who came from a line of rabbis and a father who was a timber merchant and ardent Zionist. He studied first in cheder and then in schools associated with the religious Zionist movement. In his teens he was sent to a Polish government school, where he gained a secular education; he studied law at the University of Warsaw, graduating in 1935.

2. From an early age, he was a member of the Zionist movement. A follower of Jabotinsky [see my post of 12/31/12], he joined the youth branch of the Betar movement, rising quickly to become head of Betar Czechoslovakia in 1936 and of all Poland – the largest branch, with 100,000 members – in 1938. In this capacity he traveled frequently to regional branches.

3. He escaped Warsaw for Vilna three days after the Nazi invasion began in 1939. In 1940, he was arrested by the NKVD, tortured and sentenced to eight years in the gulag. In 1941, he was permitted release to join the Polish army, which in 1943 was evacuated to Palestine. There he was given a leave of absence to stay and fight. He joined the Irgun though he was voluble in his criticism of their leadership as being too cooperative with the British.

4. In 1944, he assumed leadership of the Irgun, proclaiming a revolt against the British – a move that was opposed by the Jewish Agency. When in 1946 he ordered the bombing of the King David Hotel, the British placed a bounty of ten thousand pounds on his head.

5. After the founding of the State of Israel in 1948, the Irgun was disbanded. Begin founded the Herut (Freedom) party in opposition to the labor party, Mapai, and was elected to the first Knesset, with a nationalist agenda.

6. In 1977, after three decades of labor dominance, Begin became the sixth Prime Minister of Israel as a founding member of Likud, which was a consolidation of Herut and other parties. 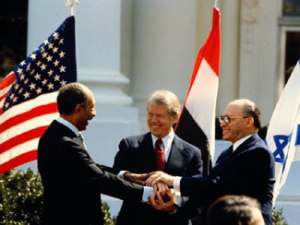 7. As prime minister, he signed a peace treaty with Egypt and shared the Nobel Peace Prize with Anwar Sadat. Israel withdrew from the Sinai Peninsula in the wake of the Camp David Accords. In exchange for recognition of Israel’s legitimacy, Begin gave up land. (Is it only a great warrior who can accomplish such ends? I hate to think so.)

8. During Begin’s term in office, impoverished towns and neighborhoods – occupied primarily by Sephardi and Mizrahi Jews – were upgraded; many of the measures he took moved the economy away from socialism and toward capitalism. With the prime minister’s blessing, many new settlements were built in the West Bank and Gaza, quadrupling the Jewish population there.

9. In June 1981, Begin authorized the bombing of a nuclear plant in Iraq; in 1982, the invasion of Lebanon to fight PLO strongholds – resulting in a protracted war that sucked at the life and soul of Israel’s self-identity.

10. His wife, Aliza, died in 1982, and he resigned from public life in 1983, spending the remainder of his life in seclusion. Begin died in 1992 and was buried on the Mount of Olives. An estimated 75,000 mourners turned out for his funeral.

10. His written works include The Revolt, about his days in the Irgun; and White Nights, about being a prisoner in the Soviet Union.

12. Visitors to Jerusalem may wish to visit the Menachem Begin Heritage Center. A museum of his life and legacy, it also awards an annual prize to a person or organization that has done important work for the benefit of the State of Israel and/or the Jewish people.

1. Stephen Samuel Wise was born in Budapest in 1874 and brought to the United States at the age of 17 months. His maternal grandfather had created the Herend Porcelain Company. When Wise’s father tried to unionize the company, it is said that the grandfather gave the family one-way tickets to New York!

2. Young Stephen was the son and grandson of rabbis, and he wanted to be one as well. He graduated from Columbia at the age of 18 and was ordained the following year, 1893. He went on to serve as rabbi to a number of American congregations, pioneering interfaith cooperation, social service and civic leadership. He and his followers founded the Stephen Wise Free Synagogue in New York City in 1907.

3. He was a founder of the New York Federation of Zionist Societies and led in the formation of the national Federation of American Zionists in 1898. He served as secretary of the World Zionist Organization. 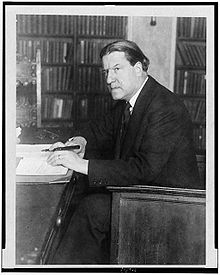 6. During the 1920s and 30s, he was a friend of the Soviet Union, and for this he was known by the sobriquet “Red Rabbi.” In response to the rise of Nazism, he encouraged the formation of the World Jewish Congress and headed it until his death. In this role, he presented the Jewish cause to President Franklin D. Roosevelt, to the State Department and to the general public.

7. He was co-founder of the NAACP and the ACLU and was prominent in other liberal American causes throughout his life. 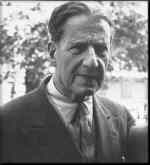 8. More about his fight against Nazism: In 1933 he urged a Jewish boycott of Germany. In November 1942, he held a press conference in Washington, DC, announcing that the Nazis had a plan to exterminate European Jewry and had already killed two million Jews. He made this statement based on a message from Switzerland that he had received in August 1942. Did the story make any front pages? No.

9. He had his share of disapprobation. He was a close friend of Franklin D. Roosevelt and was criticized for spending too much of his time trying to protect the president’s good name. And he was said to have halted relief packages to Jews in Europe, fearing accusations of providing aid to the enemy.